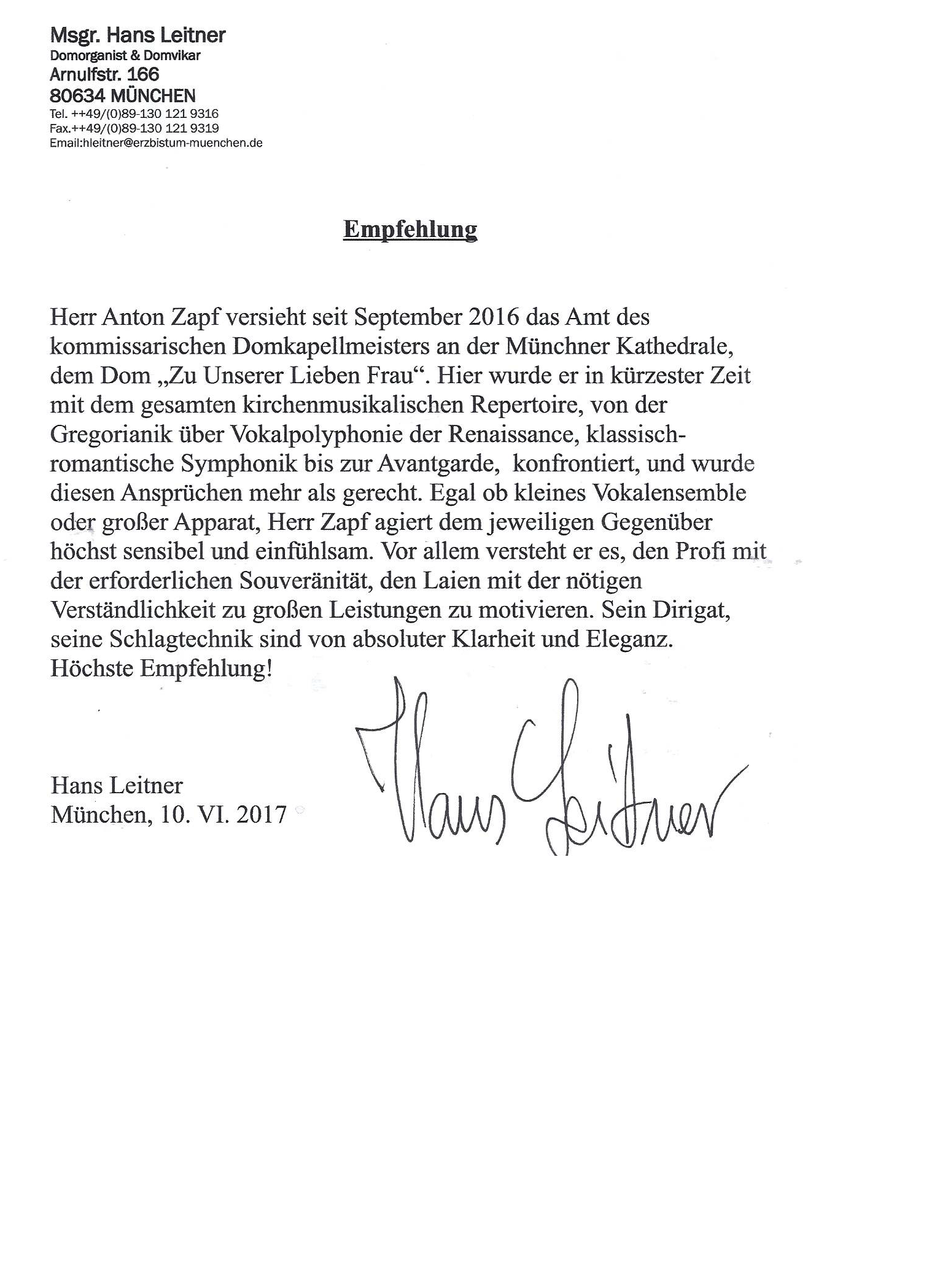 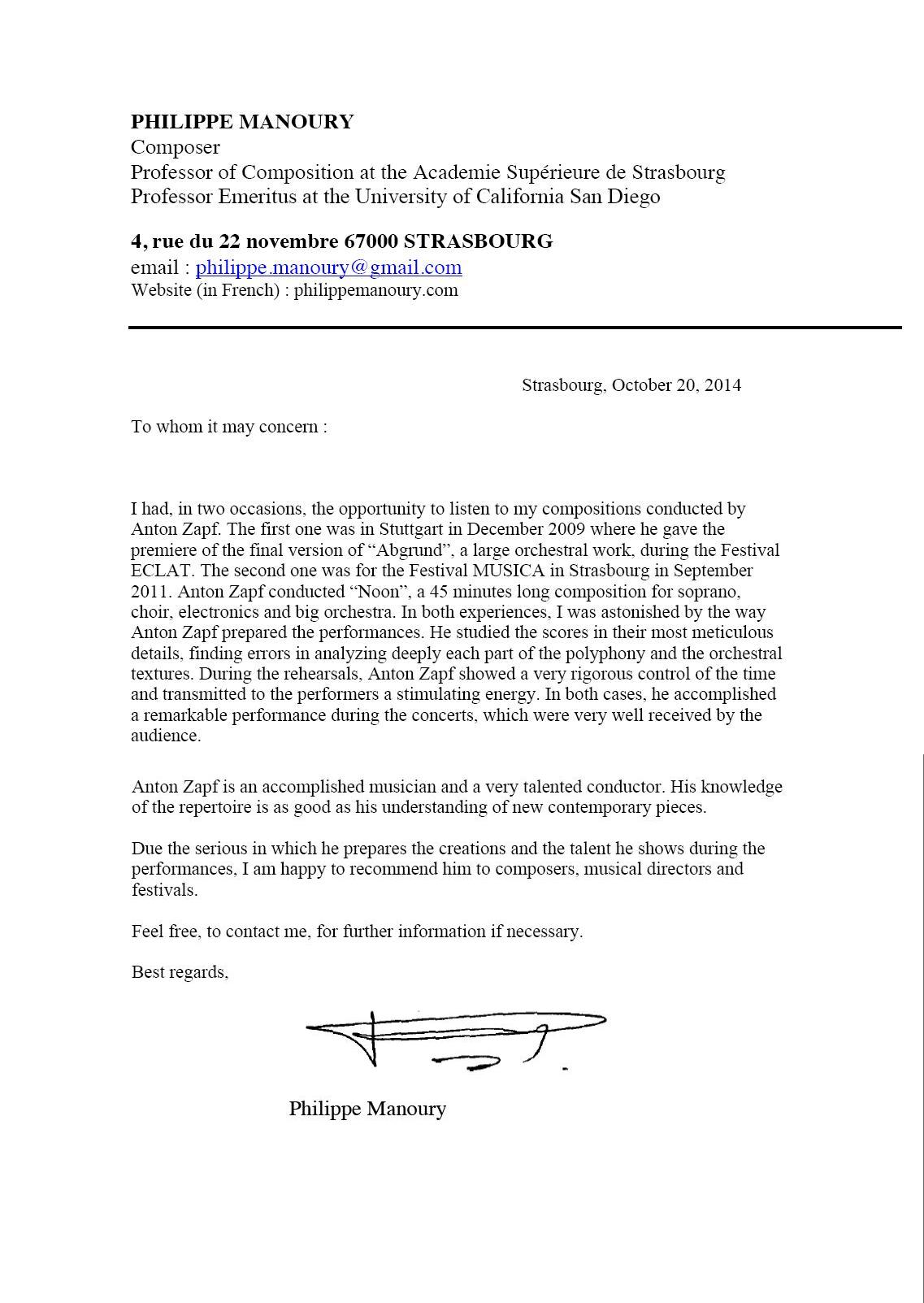 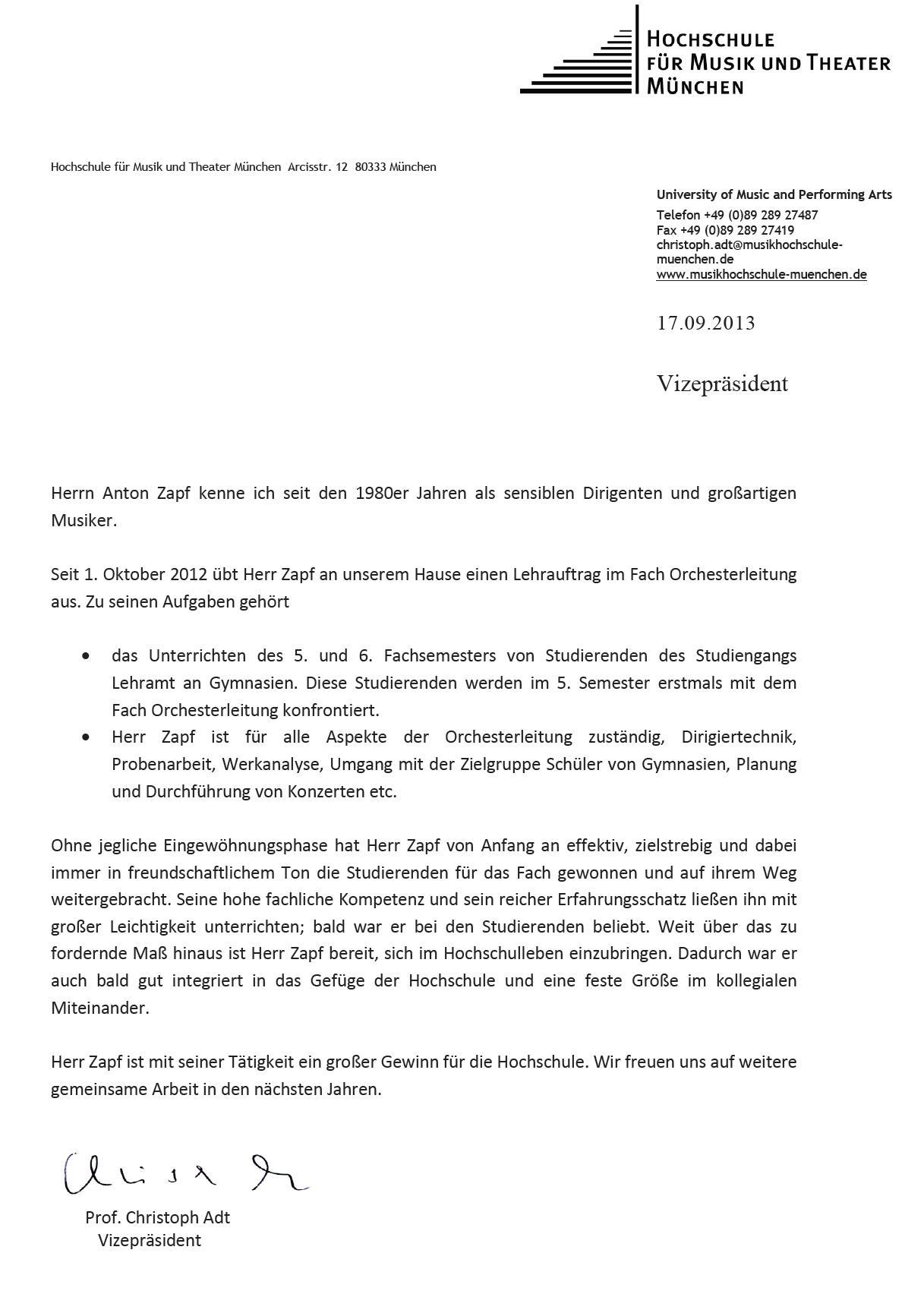 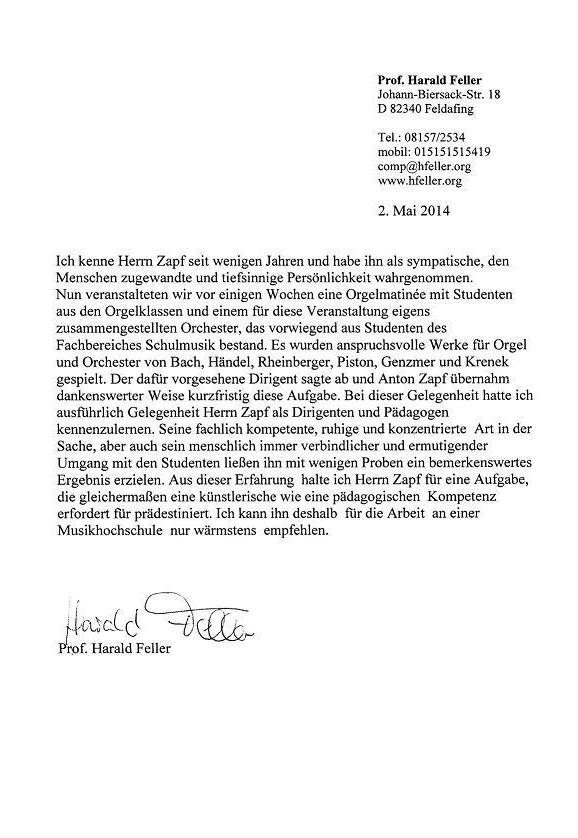 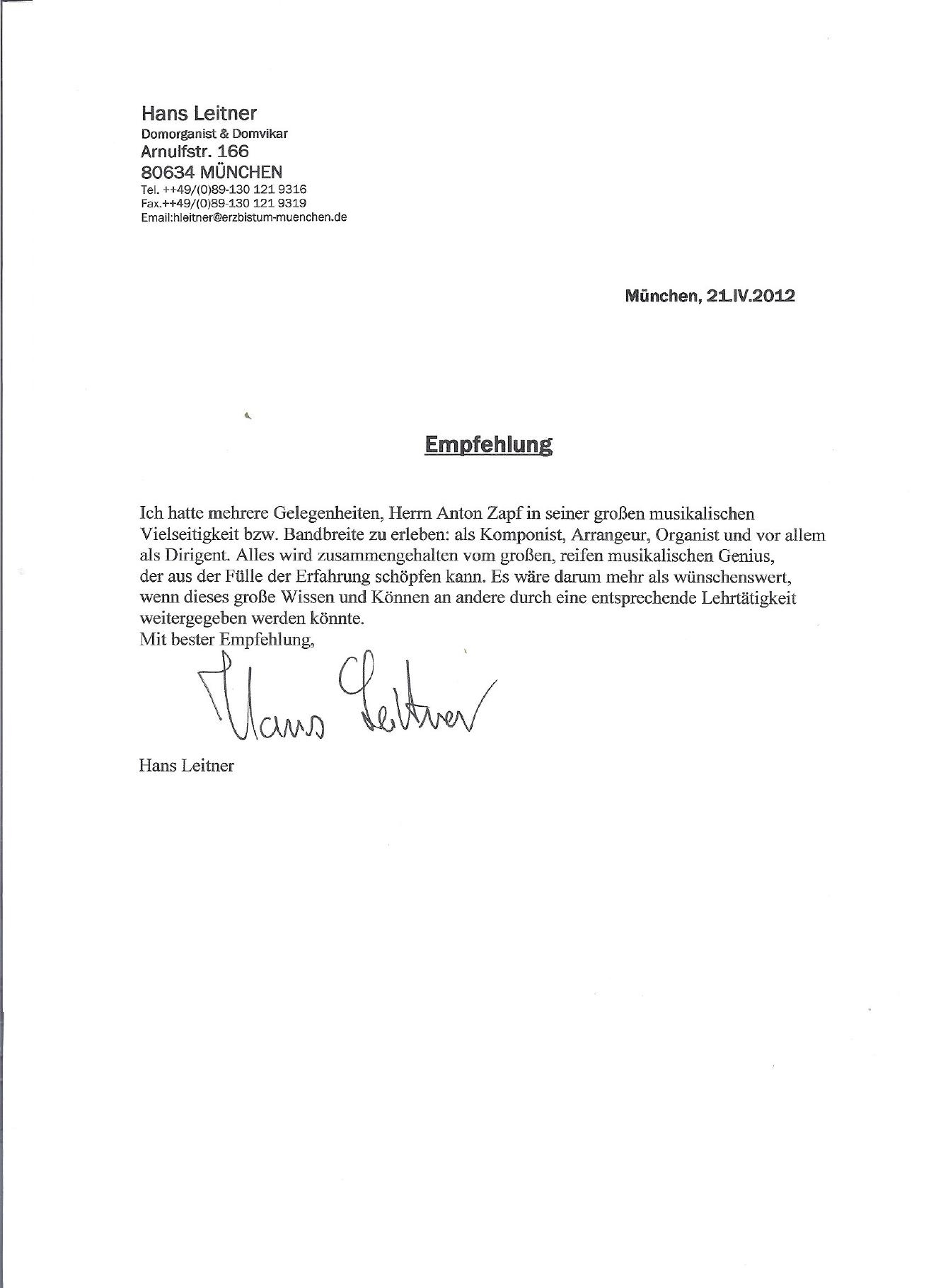 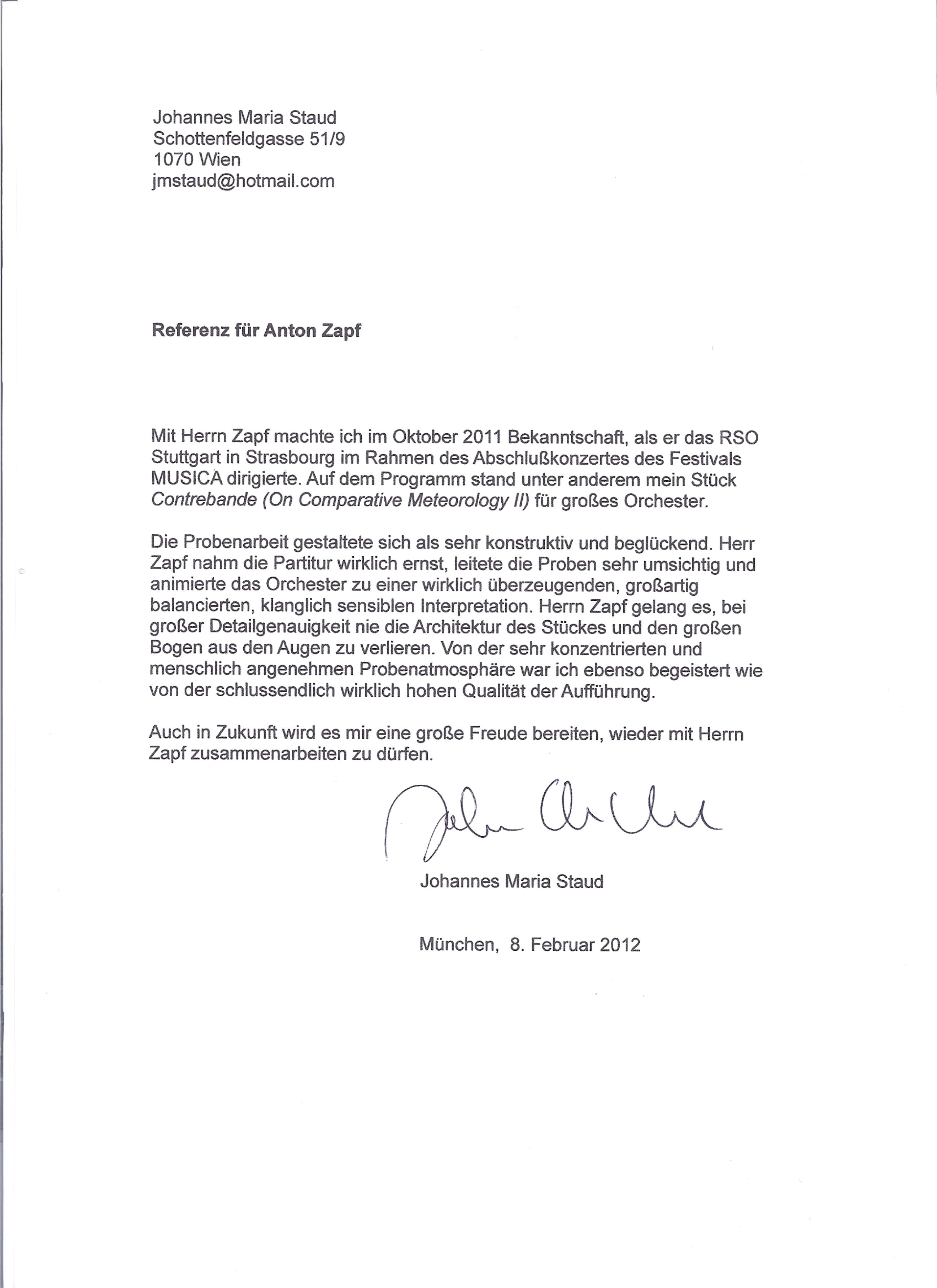 I met Anton Zapf in October 2011, when he conducted the RSO Stuttgart

in Strasbourg in the final concert of the Festival MUSICA. The program

included, among other pieces, my composition Contrebande (On

The rehearsals were very constructive and rewarding. Anton Zapf took

way, inspiring the orchestra to a truly convincing, magnificently balanced,

dynamics of the composition. I was as much enthused by the

atmosphere of high concentration and personal warmth during the

rehearsals, as I was by the truly high quality of the concert itself.

Zapf in the future. 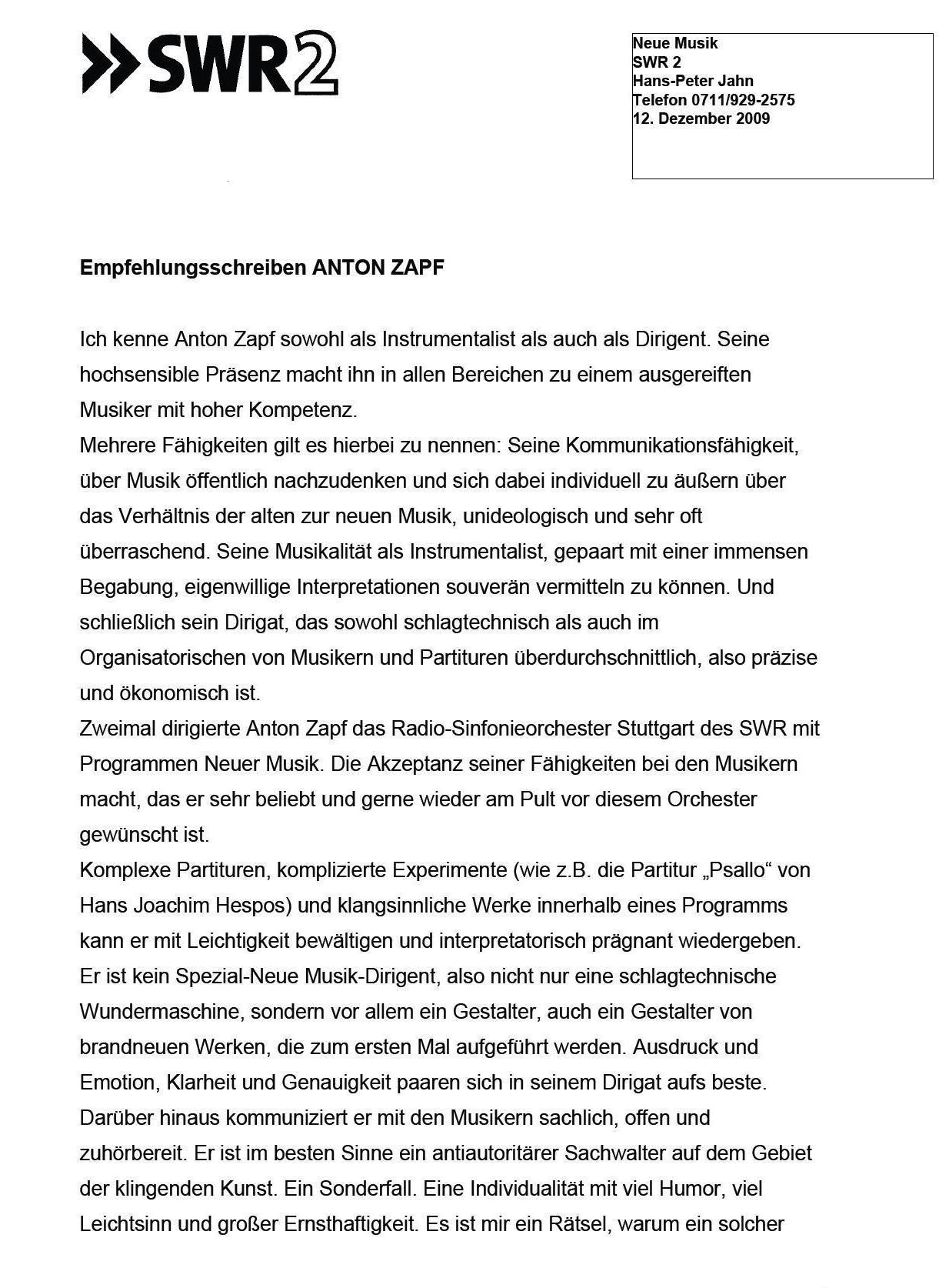 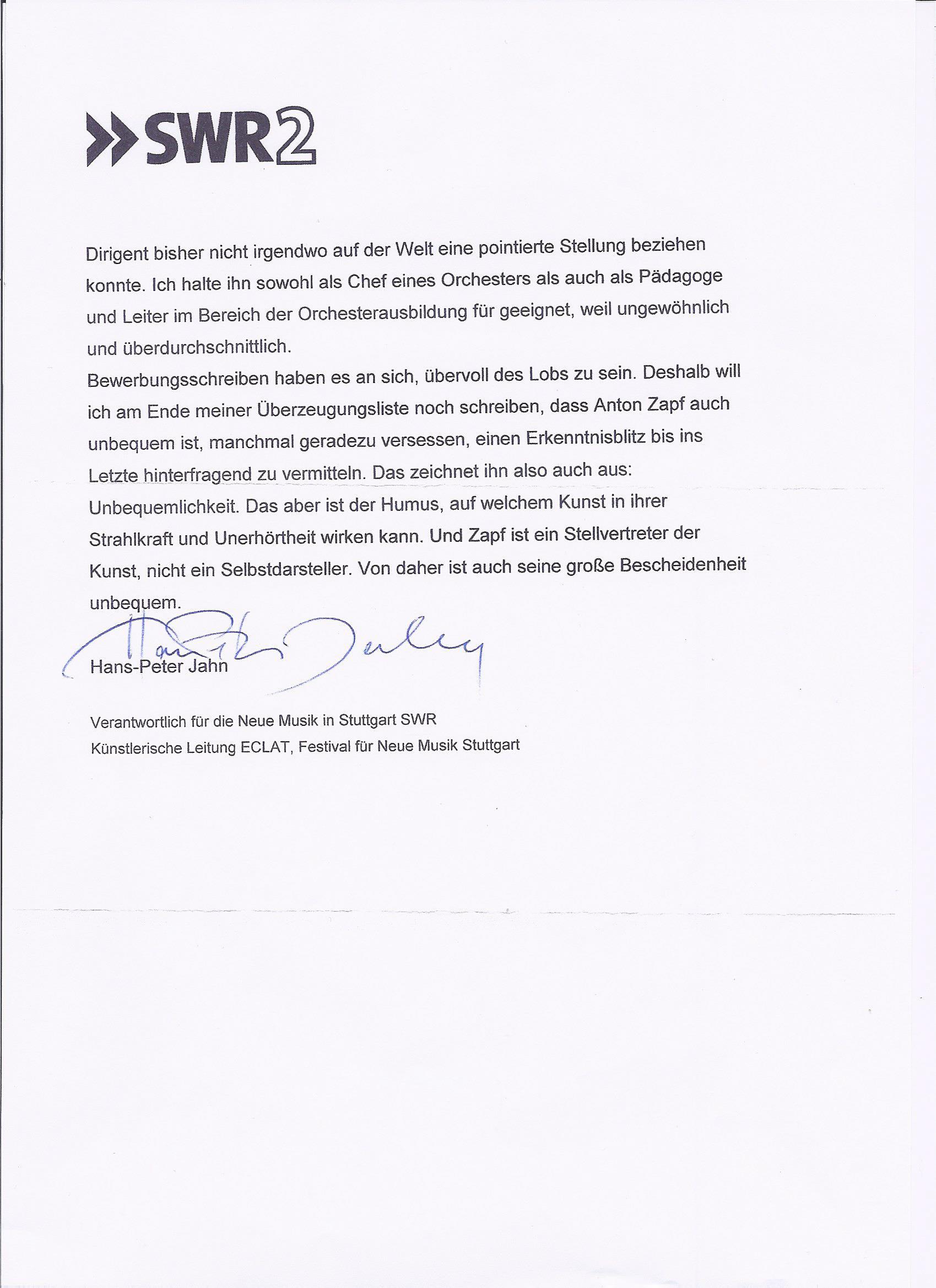 I know Anton Zapf both as an instrumentalist and as a conductor. His highly sensitive presence makes him a fully mature musician with high competence in all areas.

Several abilities are to be mentioned: His communicational ability to think about music publicly and to articulate his individual ideas about the relationship between Old and New Music in unideological and frequently surprising ways. His musicality as an instrumentalist, combined with an immense talent, which enables him to convey his original interpretations in convincing ways. And finally his way of conducting, which is way above average both in terms of baton technique and of organizational skill with musicians and scores, which means it is precise and economical. Anton Zapf twice conducted the Radio Symphony Orchestra Stuttgart of the SWR with programs of New Music. The acceptance of his abilities makes him very popular with the musicians, who would like to see him conduct the orchestra again in the future.

He can master with ease and interpret in concise ways complex scores, complicated experiments (such as the score of „Psallo" by Hans Joachim Hespos) and sound-intensive works within a program. He is no narrow New Music specialist and not merely a technical wonder machine, but above all a creative interpreter, and this also of brand new works, which are performed for the first time. Expression and emotion, clarity and precision are fused in an exemplary way in his style of conducting. He communicates with the musicians pragmatically, openly, and responsively. He is, in the best sense of the word, an anti-authoritarian representative of the field of musical art. An exceptional case. An individualist with a great sense of humor, a lot of light-heartedness and great seriousness. It is a puzzle to me that such a conductor has not yet been given the chance of holding a major post somewhere in the world. Because of his originality and high competence, I consider him qualified both as director of an orchestra and as a musical pedagogue and leader in the area of orchestra education.

Letters of recommendation sometimes have a tendency to be too full of praise. At the end of my list of positive criteria, I will therefore mention that Anton Zapf also has his own mind, and is sometimes obsessed with carrying through a flash of insight with radical consistency. This is also what distinguishes him: An independent mind. Yet this is the creative humus which art needs to unfold its appellative force and exceptional power. And Zapf is a representative of art, not a self-representer. This testifies to his great modesty, which is quite unusual as well. 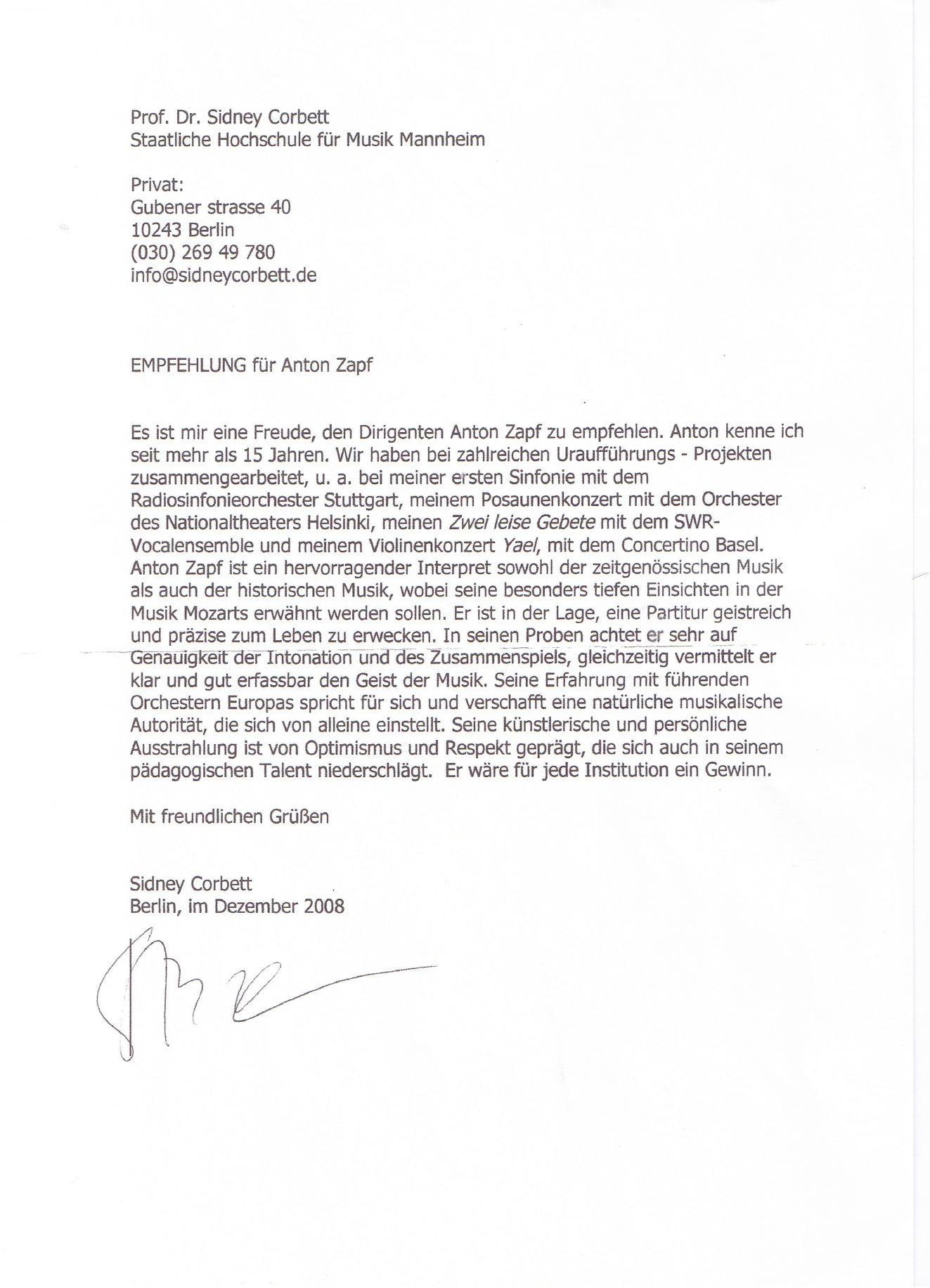 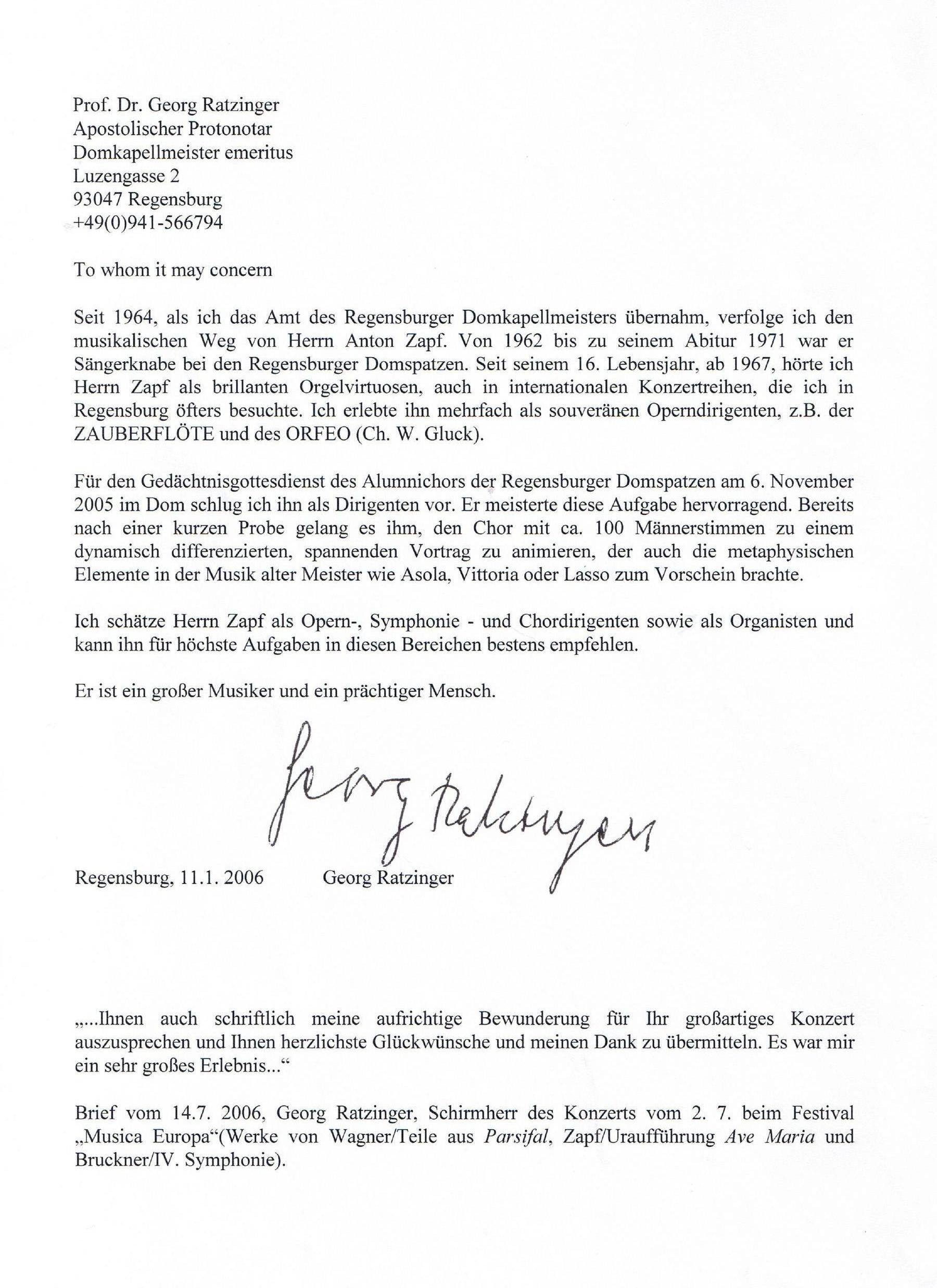 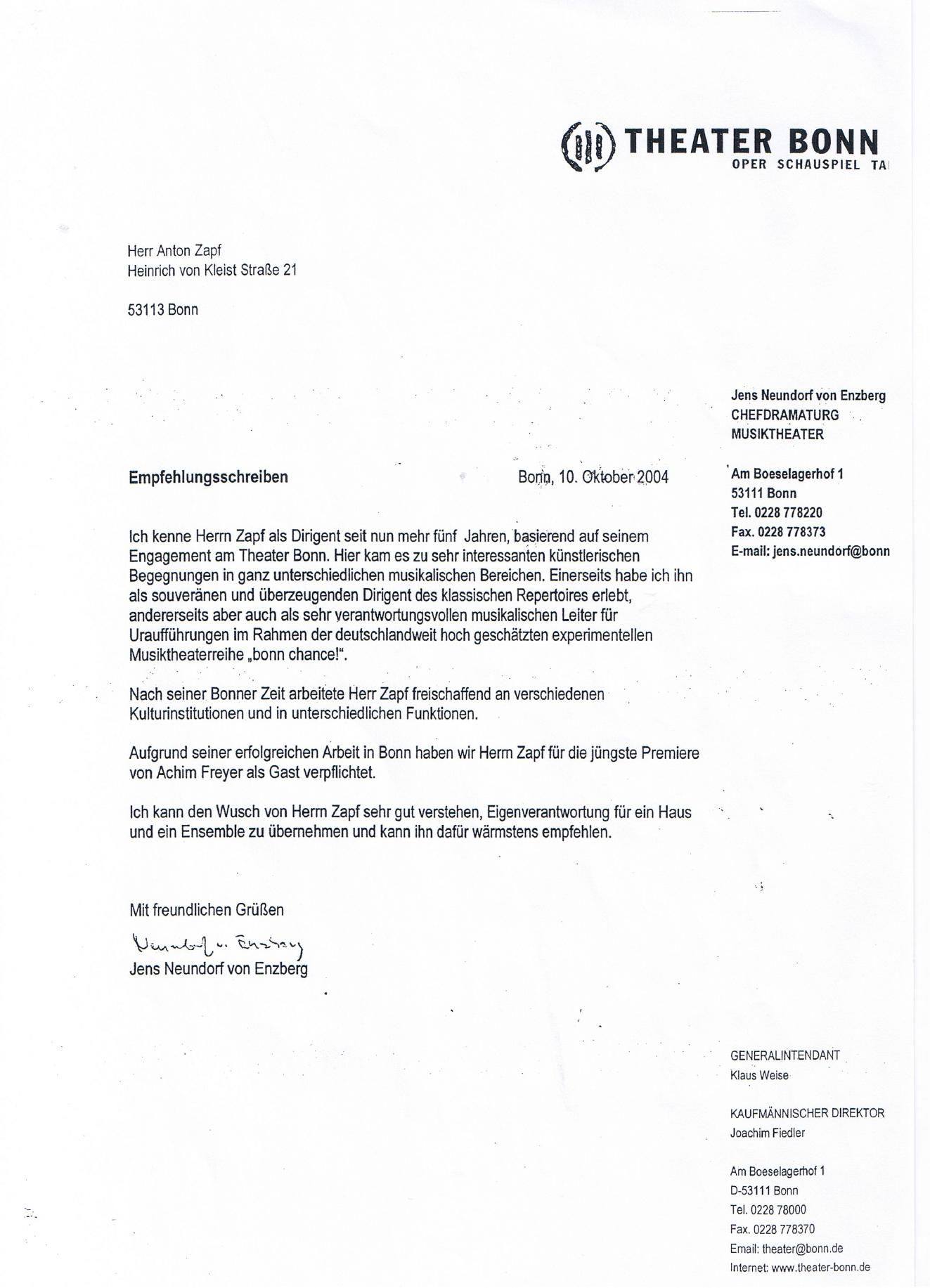 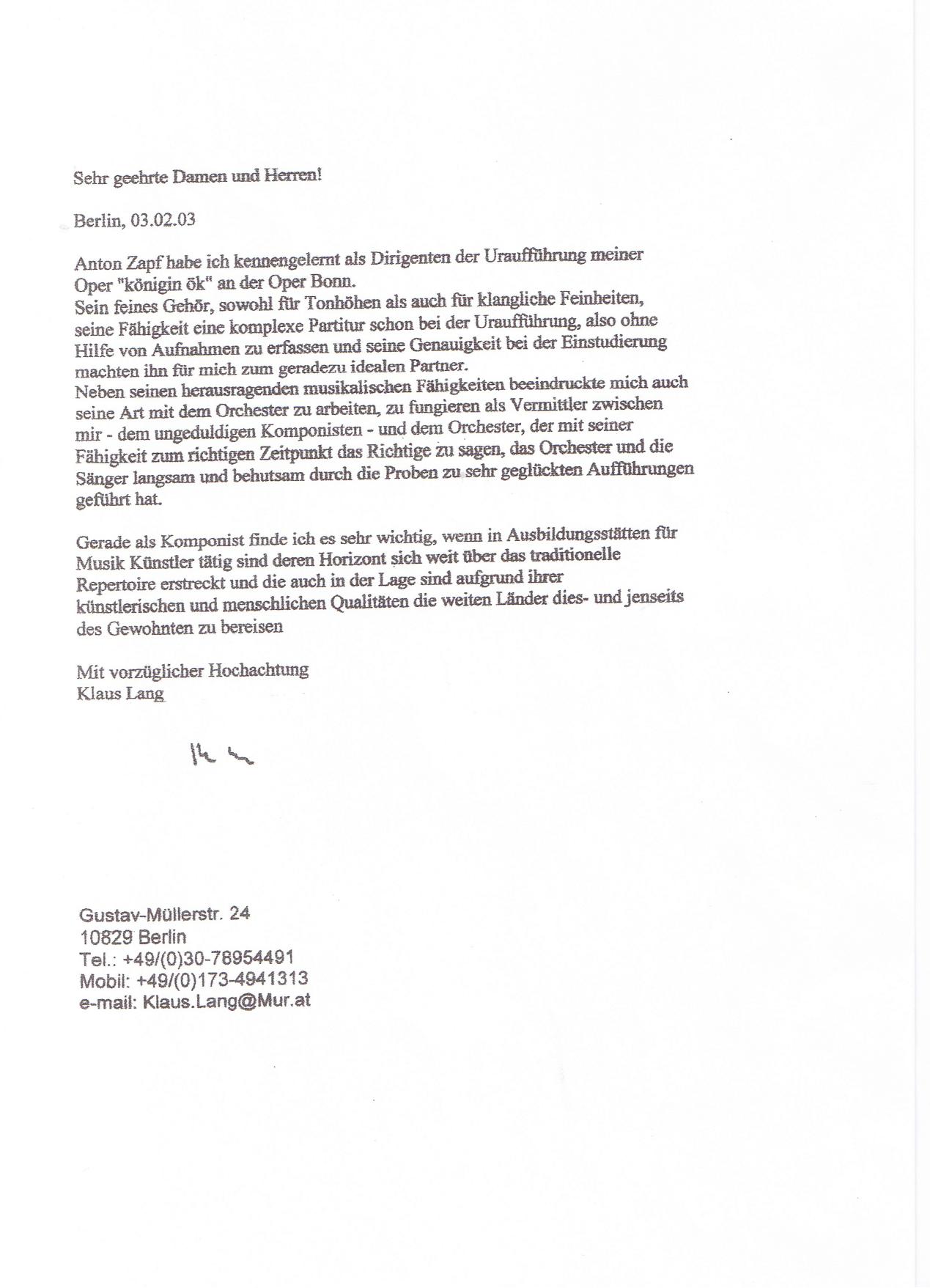 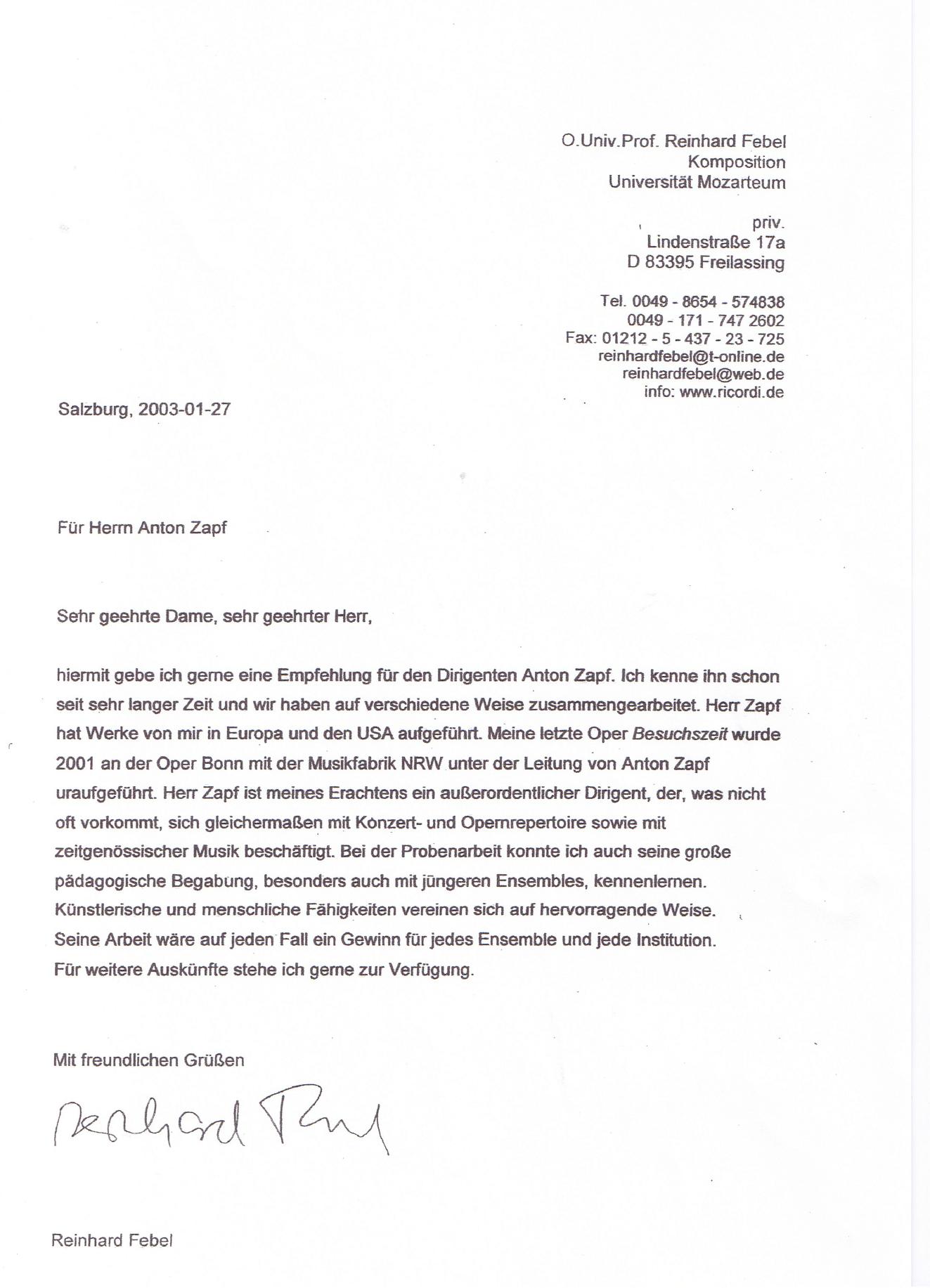 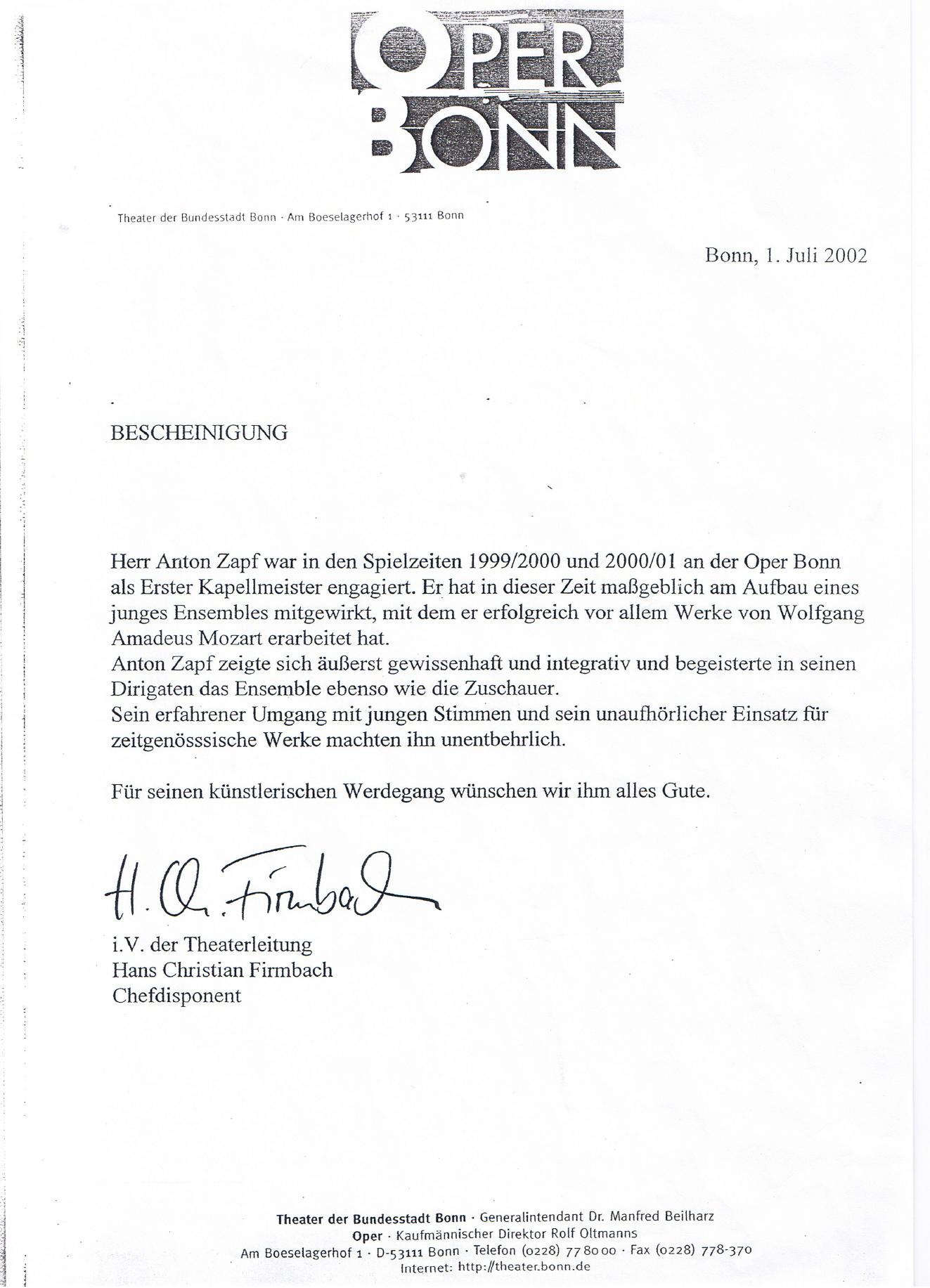