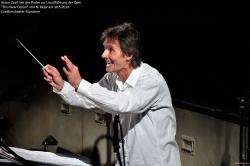 The conductor, composer and organist Anton Zapf received his basic musical education at the Music Gymnasium of the Regensburger Domspatzen, Eberhard Kraus organ and counterpoint, Georg Ratzinger Choir. He studied organ with Werner Jacob (1st prize at the organ competition Stuttgart 1973, premiere of Hans Werner Henze's  Toccata senza Fuga SWR 1979) and conducting with Thomas Ungar at the Musikhochschule Stuttgart, both examinations with honors;
Formative impressions of Sergiu Celibidache in this time. 1978 Cultural Award of the City of Regensburg. 1980-82 Karl Böhm and Rotary International Scholarship in the USA.
1983 2nd prize at the International Fitelberg Conducting Competition in Katowice / Poland; since then international career as an opera as well as a concert conductor with over 60 orchestras in 18 countries on four continents.
1983 - 1990 Kapellmeister at the Staatstheater Stuttgart; afterwards 1st Kapellmeister positions in Dortmund, at the Nationaltheater Mannheim and from 1999 in Bonn; he was a long-time guest conductor of the Finnish National Opera Helsinki and the East Bohemian Philharmonic Königgrätz / CZ, with whom he also premiered his first composition, an Ave Maria for soprano and large orchestra (2003). Meanwhile he has composed besides orchestra also works for choir, strings, organ, piano and arrangements, he performed in many european countries. Since 2010 they are published by C.F. Peters.
He was also guest conductor a.m.o. at the opera houses in Hamburg, Paris, Madrid, Oslo, Braunschweig and the North West Opera Ireland.
He has worked with outstanding singers such as Karita Mattila, Anja Harteros, Simone Kermes, Samuel Ramey, Kurt Moll, Tom Krause, Bernd Weikl or the pianist Grigory Sokolov.
His commitment to contemporary music is documented by numerous concerts, premieres and recordings, among others with the radio orchestras of the DR Berlin, the WDR Cologne, the Musikfabrik NRW, the Beethoven Orchestra Bonn and especially with the RSO and vocal ensemble of the SWR Stuttgart.
Anton Zapf also likes to teach. 2012-2017 he was a lecturer in orchestral conducting at the Musikhochschule München and conducted the B-Orchestra. From 2016 to 2018, he was provisionally cathedral music director at the Munich Liebfrauendom, with a concert tour of Rome, including performances of his own works.
In addition to his conducting and composing, Anton Zapf also performs as an organist, pianist and Lied accompanist, recently in April 2021 at the fameous Barock organ in Amorbach.
From his youth he has been active as a footballer (since 2015 at the seniors of FC Bayern) and has been Senior World Champion in Ski Jumping several times, most recently 2022 in Planica/SLO. 2020 he wan a silvermedal at the www.innsbruck2020.com, where he also conducted his skijumping songs Love, love snow and Just like birds with the Chorkuma choir Innsbruck.

In June 2021 he was appointed chief conductor of the European opera rarities ( opera-rarities.com)

In September 2022 was his first strinquartett op.24 in step in space in Munich premiered.